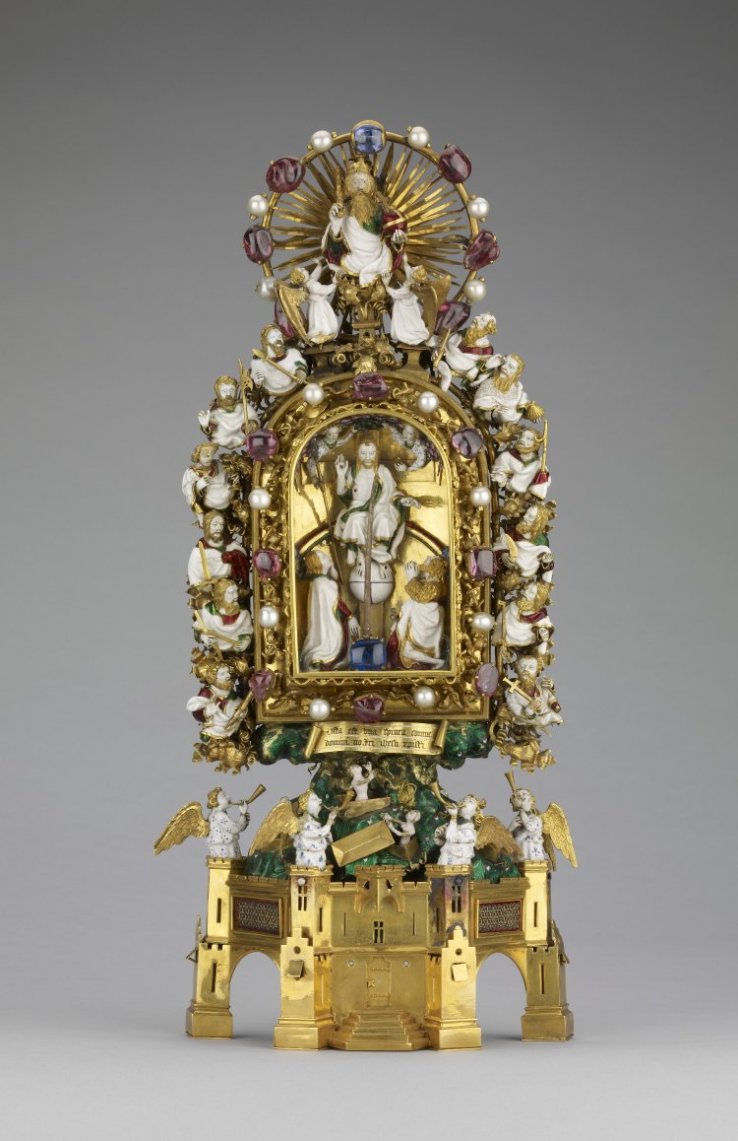 A thorn, a valueless small and sharp pointed piece of wood, is displayed in an exquisite box made of gold and precious stones, and ornamented with intricate figures and symbols. The reliquary, a valuable artefact, shows an anodyne thorn, a worthless item, but for the meaning attached to it, which is that it comes from the Crown of Thorn worn by Christ during the Crucifixion.

The Reliquary does not have a legal significance in itself but as a metaphor that illustrates, on the one hand, the duality of heritage (tangible/intangible) and, on the other, criticisms of the heritagization process which is the process by which monuments, objects, sites, practices are recognised as heritage.[1] It focuses questions such as who defines what heritage is? Who selects elements of history and material culture to ascribe meaning to the past? What is the most valuable: the reliquary (tangible/material) or the Thorn (intangible)?

The reliquary was made around 1390s. It is 30 cm in height, 15 cm in width and 7 cm in depth. It is made of rare and expensive material: enamel, gold, pearls, precious stones (sapphires and rubies). Its base is a fortress with four turrets; each occupied by an angel sounding a trumpet. It is surmounted by a green-enamelled hill with four open coffins from which four people are standing, hence representing mount where Christ was buried and rose from the dead (the Resurrection of the Dead). Above it, there is a rock-crystal window within which sits Christ in Majesty, with two angels holding in one hand a crown of thorn above his head, and on the other, the instruments of the Passion (spear and nails). At his feet, there is one figure on each side, the Virgin and St John in the scene of the Last Judgment. The Thorn, approximately 8 cm long is in the middle, resting on a cabochon sapphire. Around the window, there are 12 figures, representing the twelve Apostles with their associated symbols. At the top, God seats amidst sunrays with two angels at his feet. At the back, there is an empty cavity with doors that have representations of St Michael and the Devil and St Christopher carrying the Christ Child.[2]

The Holy Thorn Reliquary is a beautiful object that exemplifies the importance of Christianity in the Middle Ages. It was commissioned by Jean Duc of Berry before 1397 to display one of the thorns of the Crown of Thorns worn by Christ during the Crucifixion.[3] This great relic of medieval Christianity was bought by the King of France Louis IX in 1239 for the price of 135,000 livres; which was equivalent to half the annual expenditure of the kingdom of France, showing the invaluable aspect of the single thorn displayed.

The reliquary exemplifies first the widening definition of heritage and second the subjectivity of the heritage discourse. As Smith commented, ‘the physicality of heritage also works to mask the ways in which the heritage gaze constructs, regulates and authorises a range of identities and values by filtering that gaze onto the inanimate material heritage’[4] If one questions the existence of Christ, as the ‘official discourse’ of heritage, then the thorn becomes valueless and the reliquary a nice artefact to look at. Hence, one can question what heritage is and who attributes values to heritage?

Firstly, the reliquary illustrates the widening definition of heritage from tangible to intangible. Initially, heritage was associated with tangible, material manifestation of heritage. For example, the base of the reliquary represents a fortress (monument) and the window a chapel that can be admired as standalone beautiful, interesting, or curious artefacts. It is beautiful in itself and can be admired and exhibited in a museum as a representation of the craftsmanship and dexterity of its makers more than 600 years ago. Similarly, museums exhibit artefacts from different communities that can be admired without understanding of their intangible values. Since the 1990s, the definition of heritage has widened to include stories, languages, songs, practices or rituals, intangible elements; such as the value of the Thorn, an intangible link to Christ. Then, the tangible heritage (reliquary) is the physical embodiment of the Catholic faith and aims to explicit its intrinsic values (the story of Christ). Similarly, the cultural significance of objects exhibited in museums should be takin into consideration when identifying and defining what its value is.

Secondly, heritagization is the process by which elements of a culture (buildings, gardens, landscapes, objects, practices, rituals, and traditions) are identified as heritage. It is not a contemporary phenomenon in the sense that people have always selected elements of history and of material culture to ascribe meaning to the past. However, from the late 19th century, heritagization has developed ‘a particular stand’ that has shaped the power relations that gave rise to the universalist discourse of heritage in the 21st century.[5] In the case of the reliquary, the official/universal discourse is found in the Catholic faith and the story telling of Christ’s sacrifice and the Resurrection of the Dead. This story relies on knowledge of the Catholic faith to read and understand the many symbols and references to the New Testament. For examples, the instruments of the Passion are the nails and the spear that have caused the five wounds (two on his hands/writs, two on his feet and one the right hand side of his chest, opposite his heart). Another example is found in the instruments held by the different Apostles that help identify each of them, such as a set of keys for Saint Peter, a scallop shell for Saint James (son of Zebedee), a saw for St James (son of Alphaeus)…

If one questions the existence of Christ, as the ‘official discourse’, then the thorn becomes valueless and the reliquary a nice artefact to look at. Similarly, heritagization has created a common sense of identity and memory that allowed for the exclusion of minor forms of expression and of minorities as discussed by Laurajane Smith’s Authorised Heritage Discourse approach and Rodney Harrison’s official/unofficial approach.[6] Hence, one can question where heritage is found, how it is displayed, what is its value and who attributes values to it?

In conclusion, heritage is not an assemblage of monuments, objects, antiquities, practices, songs, it is not a list of word heritage properties, it is not a list of intangible practices. Heritage is a political and social process that is organised by experts; it is a process of selection, of identification of places, objects, monuments that contribute to the construction of national identity; or as in the case of the Reliquary, religion. A valuable artefact (the reliquary) displays an anodyne piece of wood but for the meaning attached to it (the thorn), the former narrates/explains the importance/relevance of the latter. In other words, tangible heritage is the physical embodiment of intangible heritage that aims to explicit its intrinsic values as defined by experts.