As part of my MA in Graphic Media Design at London College of Communication I was asked to explore how ‘we formulate a critique and articulate a position through design’ using the unfamiliar form of a visual essay, specifically by responding to one of three ‘source materials’ (articles). I chose Max Bruinsma’s contribution, entitled ‘Watching Formerly Reading’, to the ireadwhereiam project.

We used visual tools to analyse the piece as a group. This lead us to focus on Bruinsma’s insight about growing overlap and flattening of hierarchy between watching/reading, and between oversight/insight. 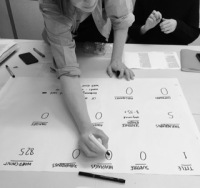 Later I cut up the article, revealing further insights:
We read differently. We process more text. Image has become text.

This linked me back to earlier (2014) ideas I expressed in an article on ‘The Case for a visualised economic sociology of legal development’ about the fact that we need to explore images/objects, as well as text, if we are to understand econo-legal life.
Meanwhile I faced Jan Van Toorn’s compelling demand that design ought be content-based, open and dialogic, establishing a conversation into which the audience is empowered to insert itself. So I began a dialogue with academic colleagues, asking them to send me their non-text sources.

I experimented with them, trying visually to express ‘reading differently’ and ‘processing text’, and to practice semiotic techniques introduced in a lecture by Vanessa Price at London College of Communication. 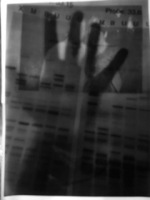 This highlighted that crucial marker of worthwhile reading/watching: critical engagement. I found this idea reflected in Bruinsma’s final words: ‘If you really want to fathom something, you will have to watch.’
Following a brief, total, loss of direction, I read and watched John Berger (1972/2008) on looking (p.9) and collecting (p. 30), and realised could better ‘fathom’ images I had consciously collected. I settled on images from my research into econo-legal aspects of Cyprus as a British protectorate (1878-1914), colony (1914-1960) and contemporary postcolony, conducted at and around the Centre for Visual Research and Arts (Nicosia). 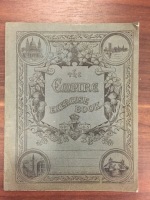 I experimented with  i’mgoogle.com-inspired format (circular slideshow with sound). It was too closed to be dialogic.  A photo of Nicosia’s ‘walk the walled city’ graphic provided the centre for a solution: I set type to reflect its circular path, other images fold out from it, each layout loosely organised by topic (e.g. occupation, development) and visual content. A dialogue opened between walker/reader and images.

The folded format allowed progressive disclosure and low-level interactive dialogue. But the Paris Salon/Warburg-style (Johnson, Undated) layouts were too closed.

My project was rescued when I followed advice to closely read visual relationships between my sources. I eventually fully integrated images within each layout. My visual language (layering, interlocking, echoing) hinted at possible connections and their inherent fragility, and was inspired by the commitment of the Association for Historic Dialogue and Research (Cyprus) to ‘dialogue and multiperspectivity’ in history.

Some elements of the final output are too small/faint, and I am in two minds about whether the images are still (differently) closed.

Critical statements on all of the projects produced in response to this brief, together with comments on them, can be found on the course blog.